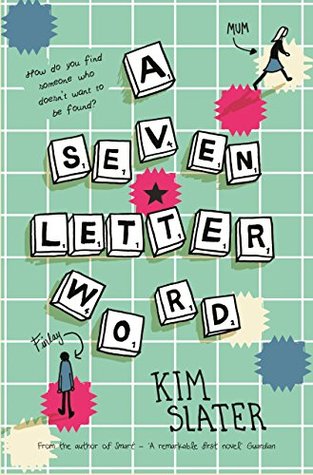 ‘My name is Finlay McIntosh. I can see OK, can hear perfectly fine and I can write really, really well. But the thing is, I can’t speak. I’m a st-st-st-stutterer. Hilarious, isn’t it? It’s like the word is there in my mouth, fully formed and then, just as it’s ready to leave my lips . . . POP! It jumps and ricochets and bounces around my gob. Except it isn’t funny at all, because there’s not a thing I can do about it.’

Finlay’s mother vanished two years ago. And ever since then his stutter has become almost unbearable. Bullied at school and ignored by his father, the only way to get out the words which are bouncing around in his head is by writing long letters to his ma which he knows she will never read, and by playing Scrabble online. But when Finlay is befriended by an online Scrabble player called Alex, everything changes. Could it be his mother secretly trying to contact him? Or is there something more sinister going on?

A Seven-Letter Word is an evocative and heartfelt story from the multi-award-winning author of Smart, Kim Slater.